Thomas Richard Guppy, friend and adviser to Isambard Kingdom Brunel, was my 3x great uncle. He was a gifted engineer who made many contributions particularly in the field of marine engineering and ship design. A life spent on construction sites and in iron foundries took its toll on Guppy’s health and at the age of 53 he moved from Bristol to Naples, in response to an invitation from the latter city.

For most of the nineteenth century Italy was moving slowly towards unification. But in 1849 southern Italy was a separate state known as the Kingdom of the Two Sicilies, formed in 1816 from a union of the kingdoms of Sicily and Naples. Naples was the capital of the combined lands; and it was here, not in Rome, Milan or Turin, that the first Italian railway was constructed in 1839.


The inaugural journey on the Naples-Portici line, recorded here in a contemporary painting by Naples court painter Salvatore Fergola, took nine and a half minutes


The Naples-Portici line runs east from Naples around the bay for a little under five miles. Last summer, driving to Sorrento on the motorway in the narrow transport corridor between the sweep of Naples Bay and the slopes of Mount Vesuvius, I kept company with the line for part of the way.


Vesuvio was the name of the locomotive which hauled the inaugural train of eight coaches on 3rd October 1839 in the presence of King Ferdinand II of Naples. The engine was built to designs of British railway pioneer Robert Stephenson by his regular manufacturer Michael Longridge at Bedlington, Northumberland. 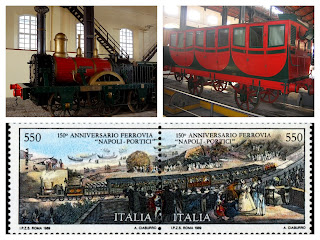 Above: an original coach from the inaugural journey, and a reproduction of the locomotive Bayard, which ran on the Naples-Portici line from December 1839 and was built to the same design as Vesuvio - both now in the National Railway Museum, Pietrarsa.
Below: based on the Fergola painting, stamps issued in 1989 to commemorate the 150th anniversary of the Naples-Portici line


With no previous Italian experience of railways, the line depended heavily on foreign input – French money and British engineering. King Ferdinand was determined not to be dependent on overseas expertise and in 1845 he opened Italy’s first railway workshops at Pietrarsa.


The first locomotive to roll off the production line was the Pietrarsa, still British designed and manufactured, but assembled in Pietrarsa. In 1852 the workshops wisely produced a huge cast-iron statue of their founder King Ferdinand, which still stands at the Pietrarsa workshops – now Italy’s National Railway Museum. 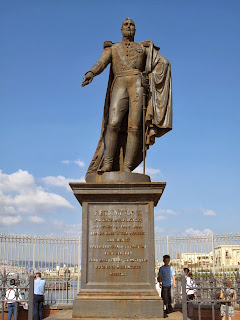 King Ferdinand II, founder of Italian railways, now stands outside the foundry which he founded, and which founded his statue


But Pietrarsa struggled with the high cost of importing coal – from Britain – and perhaps its continuing lack of metallurgical expertise was behind the invitation to Guppy which prompted his relocation in 1849. His reputation as engineer and director of both the Great Western railway and the Great Western Steamship Company must certainly have preceded him. He established his own engineering works in Naples, and over the next decade the metalworking industry there came to be dominated by just two firms – Guppy & Co, and Pattison & Co. John Pattison was a former colleague of Guppy’s.


Guppy’s firm was at one stage producing three locomotives a year for the expanding Neapolitan railway network. But his abiding interest was in marine engineering. After Italian unification in 1861 he and Pattison, pre-eminent in the new nation’s most important naval base, were extremely well placed to supply the needs of a new national Navy. Pattison built ships – destroyers and, later, faster more maneuverable torpedo boats – and Guppy supplied the engines to Pattison and others. 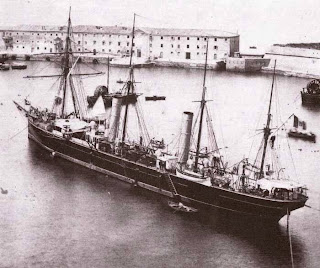 The escort vessel Rapido, built in 1876 by the Orlando Brothers in Livorno, with engines by Guppy & Co


For his contribution to the defence of the new nation, Guppy was knighted, receiving the title Cavaliere della Corona d' Italia. In his last years he continued to visit his workshops three days a week, and spent his leisure hours tending a vineyard on his estate near Portici (modern-day Herculaneum). He approached the cultivation of the grape with the same assiduous scientific rigour which he had applied to ships and trains. 2014 sees the 175th anniversary of the opening of the Naples-Portici; and I will be raising a glass of Herculanean wine to celebrate Thomas Richard Guppy’s part in its history. 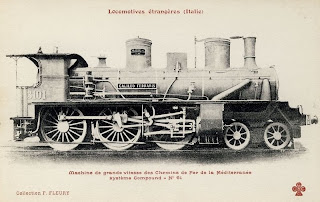 An Italian engine type FS660; Hawthorn-Guppy, the 1885 successor to Guppy’s original Naples workshops, produced 12 of them 1903-1904. They remained in service until 1930, a tribute to Guppy's standards of engineering excellence.
Posted by Heart of the Wood at 07:30

Email ThisBlogThis!Share to TwitterShare to FacebookShare to Pinterest
Labels: Guppy