The family of Kent farmers Willie and Maggie Masterman was a remarkable one. Amongst their offspring, my second cousins, were a medical pioneer, a bishop, a marine zoologist, a member of Lloyd George’s cabinet and a successful pulp fiction author (eventually).


The author was the wonderfully trashy Walter Sydney Masterman, who wrote 27 exuberantly fantastical blends of crime and sci fi between 1925 and his death in 1946. Walter was the youngest of the brood of six boys and one girl (who distinguished herself in academia).  The nearest to him in age, only fifteen months older, was his brother Harry, Henry Wright Masterman, and the two formed a close bond as they grew up. 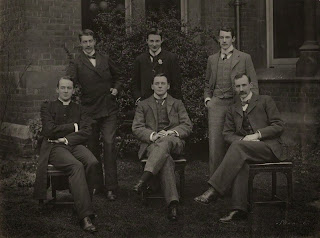 
They were day boys together at Tonbridge School and both completed their education at Christ’s College, Cambridge, with sporting disctinction. Walter won the Swimming Points Cup at school in 1893, and a football blue at university; Harry was in both the cricket and the football teams at Weymouth College through which he had passed en route to Cambridge. Both also won a half blue in water polo at Cambridge, where in the 1897-98 season Walter was described as “a good half for defensive work and has played useful games at outside right.” After graduating, both played semi-professional football for their local side Tunbridge Wells FC. Walter played in defence, and Harry was centre half for this game against a London Welsh side on 18th March 1899. 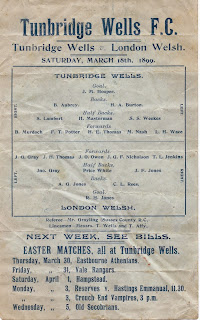 
Harry intended to pursue a career in medicine like his oldest brother Ernest. He had already begun his training at St Bartholomew’s Hospital in January 1899, two months before the London Welsh match. But the Second Boer War erupted in October that year and both Harry and Walter signed up for service with the Royal Welsh Regiment. They shipped out to South Africa in December.


Like all wars, the Boer War had at its heart a struggle for control over resources – in this case the gold deposits of the Witwatersrand mines. Britain sought to bring the many states in the region into a federation under British control. But the resident Boer population feared a loss of power if voting rights were granted to the larger population of Britons arriving to exploit the mineral wealth of the land. The war began after the failure of negotiations between Paul Kruger, president of the South African Republic, and British Colonial Secretary Joseph Chamberlain.


The Boers launched pre-emptive strikes against British garrisons and towns and it wasn’t until the arrival of massive British reinforcements including Walter and Harry that the tide began to turn in Britain’s favour. The relief of the siege of Mafeking in May 1900 was an important boost to national morale.


Both Harry and Walter served as captains, but neither was in the front line. Walter was a railway staff officer at Vryburg, where the British built one of the world’s first concentration camps to house Boer women and children in appalling conditions. Harry was garrison adjutant at Prieska, which had been captured from the Boers in January 1900.


Walter was invalided out of the Boer War, I think through illness, returning to London on board the SS Assaye in August 1901. Harry alas remained in southern Africa. In November 1900 he died of malaria and meningitis in Prieska, and is buried there. The death of his nearest and dearest brother must have hit Walter hard, unable as he was to be with Harry in his final illness. More than 8000 miles from Tunbridge Wells, less than 300 miles apart in the theatre of war, but not close enough.


Charles, the third youngest of the Masterman brothers, must also have felt the death of his younger brother keenly; he wrote a short story called With Death as my Friend about it soon afterwards. Charles and Walter took over the running of Horsmonden Boys’ School, a run-down establishment in Kent, for a few years in the first decade of the twentieth century; and Walter continued to play football for Tunbridge Wells until 1906, captaining the side for his last three seasons. But the absence of Harry from the field must have been a constant reminder, and I wonder if Walter’s subsequent career, so extremely chequered, was not in part the result of this early loss.
Posted by Heart of the Wood at 07:30