A couple of days ago, 13th December 2012, was the 175th anniversary of the birthday of my great grandfather William Henry Gurney Salter. As a rule I don’t celebrate the 175th anniversary of many ancestors’ birthdays – that way madness lies. But I am reminded of this one by a rather special birthday card which he received on his 85th, and which survives in the family archive. 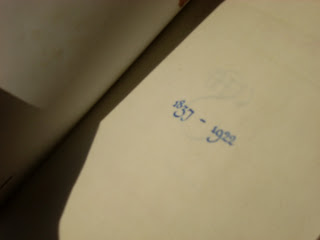 To describe the card as handmade is to describe a Vermeer as hand-painted. It is an ornately inscribed booklet: two sheets of stiff paper, hand-stitched together and then bound by vellum straps and red silk ribbon into a vellum cover. 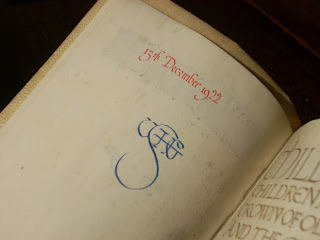 Inside, in the finest of calligraphy, the first page reads simply 1837-1922, in blue ink. The left-hand side of the central spread has his 85th birthday in red – 13th December 1922 – and a black monogram of his initials W.H.G.S. On the right, in gold, a quote from Proverbs XVII 6 which can still bring a lump to my throat because I’m sure my father also once cited it:
Children’s children are the crown of old men: and the glory of children are their fathers.
Below, in red, a simple dedication: With best wishes, W.H. 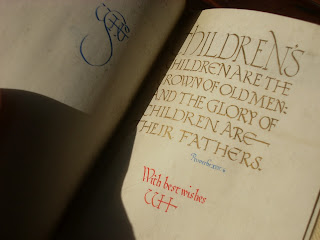 William had retired only ten years earlier from his position as head of the firm of Gurney & Sons, shorthand writers to the Houses of Parliament. He had succeeded his uncle Joseph Gurney in 1879 and Joseph’s predecessors in the post were Joseph's father, grandfather and great grandfather. William handed over the reins to his cousin William Gurney Angus in 1912; and Angus’s untimely death at the age of 54 only two years later saw the leadership of the firm pass out of the family for the first time in its 160-year history. 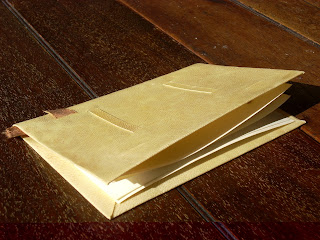 The man who took on the weighty mantle in 1914 was Walter Hodgson, the W.H. who drew the exquisite lettering in my great grandfather’s birthday card. Walter came to the post at short notice and in difficult times. Military service of one’s country in the First World War took precedence over civilian occupations and William Salter, only recently retired, returned to his old firm to help Walter settle in and cope with staff shortages. I like to think Walter’s card was a measure of his gratitude and affection for the old man of the firm – William was after all the last link with the firm’s founding family.

Eventually Walter Hodgson ran the firm in partnership with a colleague, Herbert Arthur Stevens. In 1927, a year before William’s death, the partnership was dissolved and Stevens took over in sole charge. The company survives to this day. William dedicated much of his retirement to writing a history of it, which was published privately in 1924. He also took it on himself to update in 1902 the Gurney family history first circulated in 1845 by his grandfather (and Joseph Gurney’s father) William Brodie Gurney – I have William Salter’s own copy with his handwritten notes. 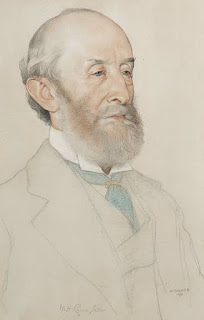 Both books are treasure troves of detailed information and anecdote. But that 85th birthday card from Walter Hodgson, bound up in vellum, is a beautiful and physical illustration of the web of history which they cover.