My great uncle Tudor looks strained and miserable in his official army portrait. He enlisted in 1915, but army life cannot possibly have suited him; before he signed up he was a gentle playful soul, a poet, a loving brother to his sister my grandmother May Castle … and a friend and partner in crime of the greatest practical joker of the twentieth century. 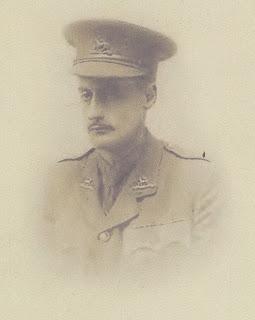 Five years earlier he was part of a notorious hoax perpetrated against the Royal Navy, which made the so-called senior service of the British military machine look very foolish indeed. The hoax was devised by Horace de Vere Cole, a friend from Tudor’s Cambridge University days and, like Tudor, part of the wider circle centred on the Bloomsbury Group of radical artists and writers. 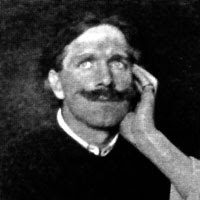 Tudor and Horace were already seasoned pranksters. During the 1906 British General Election they and a third joker, Dummer Howard (Tudor’s future brother-in-law), had staged a spoof hustings, masquerading as politicians. Horace led off proceedings with an interminable and meaningless political speech from the podium. As anticipated, the audience grew restless and began to heckle the speaker – and that was the trio’s cue for fun. We are used these days to seeing unpopular politicians pelted with rotten eggs; but on this occasion Tudor and Dummer turned the tables and suddenly began hurling eggs into the crowd. Brilliantly subversive of convention! 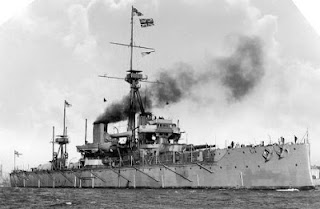 In 1910 Horace’s plan was audacious – to disguise himself and his friends as a group of visiting dignitaries from Abyssinia and con their way into a state inspection of the navy’s flagship, HMS Dreadnought. It was classic Cole – puncturing the pomposity of authority, in this case by taking advantage of imperial Britain’s eagerness to show off its might to “lesser” countries. The stunt was to take place during the election campaign of early 1910, an election triggered in part by the rejection of a budget which proposed building four more Dreadnought-type ships at a cost of £1.5 million each. 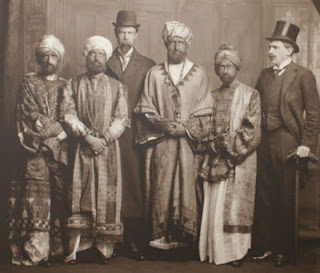 To cut a long story short, the prank was a huge success. Cole’s friends, dressed up by a London theatrical costumier, travelled down to Weymouth by train, learning a little Abyssinian on the way from a phrase book for missionaries to the country. They were met with great ceremony which included – the band being unable to find the sheet music for the Abyssinian national anthem – the playing of the anthem of Zanzibar. They were shown around the ship by Admiral May, and returned by a different rail route to London, undetected even by Cole’s cousin who was a member of the ship’s crew.

The key to the whole operation was their sudden arrival, announced by a telegram which left the navy no time for questions about its authenticity. It was Tudor who sent that telegram, without which there would simply have been no prank. When Cole, an incurable self-publicist, leaked the story to the press, it entertained the public and embarrassed the navy, forcing them to review their security procedures. They decided not to prosecute the perpetrators for fear of further public ridicule. 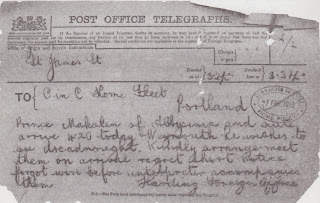 Uncle Tudor’s unseen role in it remained unknown until, naively, he wrote to the Great Western Railway a month later, requesting a refund on return train tickets which the “Abyssinians” had bought but not used. Police matched his handwriting to that of the original telegram order. But he too escaped legal action. Perhaps his death at the Somme is the reason that this wonderful illustration of his playfulness has not been passed down in our family. The tale was never told, and I only found out about it last month thanks to a message from a reader of this blog. (Thanks, Ralph!)


The Dreadnought Hoax, Adrian Stephen’s published account of the stunt, and The Sultan of Zanzibar, Martyn Downer’s biography of Cole, both give far greater detail of the hoax itself than I can include here. I recommend them both.
Posted by Heart of the Wood at 07:30