Walter S Masterman, whose grandfather Thomas Gurney was my great great grandmother’s brother, is best known as a prolific author of the 1920s and 1930s. He churned out fairly lurid and strange blends of mystery, fantasy, horror, sci-fi and detective fiction from his first in 1926, The Wrong Letter with its preface by GK Chesterton, to his last in 1942, The Man with No Head.

Walter Sydney Masterman (1876-1946)
in 1899, by Thomas Stearn & Sons, photographers
It wasn’t his first choice of career, or his second, third or fourth, and definitely not his fifth. After a well-heeled private education he merged from Christ’s College Cambridge with a blue in football, and played for a while alongside his brother Harry for Tunbridge Wells FC.  He and Harry both joined the Welsh Regiment on its formation and went with it to South Africa in February 1900 to fight the Boer. Harry didn’t come back, and lies buried in Prieska where he was the garrison adjutant and died of malaria and meningitis.
On his return, Walter (now a captain) entered civvy street like so many officers as a teacher at a private institution, Horsmonden Boys’ School, where he was from 1903 to 1905 joint headmaster. He maintained his military role through an attachment to a Cadet Batallion of the King’s Royal Rifles, and in 1910 was appointed Inspector of Musketry with the Welsh Regiment, with whom he served again as a major during the Great War of 1914-19. 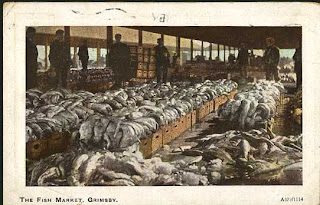 Grimsby after the Great War
When he was demobbed in 1919 he got a job in the civil service – the Ministry of Agriculture to be precise. In the days when expertise was no criterion for government work, Walter was made a Fisheries Inspector and posted to Grimsby, then still an extremely busy fishing port in north Lincolnshire. From footballer to soldier, then teacher, and at the age of 43 fisheries officer. It's possible that he was assisted in getting this appointment by his brother Arthur, a zoologist who published extensively on the life-cycles and importance of the fish we eat, including some reports for the Ministry. Otherwise, it seems an unlikely fourth career choice for Walter.
The next year he married Olive Doreen Lowrie, 24 years his junior, the youngest of eight children of a Northumbrian commercial traveller who had stopped long enough in Cardiff for it to be birthplace to Olive and her two nearest siblings. How Olive and Walter met, and how they found life in Grimsby, I do not know. But in Febraury 1922 this news item was cabled to colonial newspapers around the world (I found it in the Sunday Times of Perth in Western Australia!):
Walter Sidney Masterman, fishery inspector at Grimsby, a brother of a former Liberal Minister, is being charged with embezzling £862 belonging to the Board of Fisheries. The prosecution alleges that the defendant paid into his own account sums received, for the sale of coal and gear handed over from German trawlers.
Poor Olive, married two years and stuck in a cold town smelling of fish (sorry, Grimsby, I know you’re sweeter now) while her husband began a new career as a jailbird, convicted and imprisoned for three years for defrauding his employer. When he was released in 1925, it is safe to assume that he had blotted his copybook as far as future employment in any of his former careers was concerned.

Several Walter S Masterman titles were translated
for Dutch consumption in the 1950s
Perhaps he picked up some plot twists during his time inside. No longer employable, Walter sat down and began to write, a string of wild titles such as The Flying Beast, The Baddington Horror and The Hooded Monster. I confess I haven’t read any, but this synopsis from one of four new editions currently available on Amazon gives an idea of his style:
“THE YELLOW MISTLETOE is … the rollicking tale of murder in the tubes of London, which looks to be an accident, until Chief-Inspector Arthur Sinclair proves that it wasn't. The trail of evidence leads to the English countryside where he meets a cast of characters right out of a H. Rider Haggard novel. Then it's off to the wilds of Bulgaria where a hidden city provides enough ritualistic danger for a dozen thrillers.”
I’d love to know what happened to Olive Masterman. They had at least one daughter, born that disastrous summer of 1922. Did the marriage survive the jail term?  Or did Olive, with her life ahead of her, find happiness elsewhere? The story of her life remains unwritten.
Posted by Heart of the Wood at 07:30