The last edition of the current series of Word of Mouth (BBC Radio 4’s programme about aspects of the English language) was broadcast earlier this month. It was a brief history of the art of shorthand-writing, in which I have an ancestral interest, so I tuned in out of curiosity. 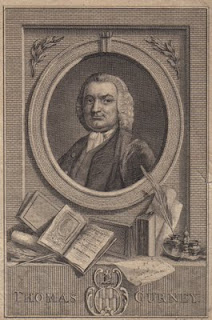 Thomas Gurney (1705-1770)
with the symbols of his invention
It was a good programme as far as it went – the Romans used shorthand, which I didn’t know; and the Elizabethans reintroduced it, which I did know (all those transcription errors in trying to capture Shakespeare’s scripts from live performances!). However from there it cut straight to some admittedly fascinating archive recordings of the original Mr Pitman, leaving a glaring gap - no reference at all to the Gurney System of Shorthand, the first modern system, invented in 1722 by my 5x gt grandfather Thomas Gurney.
It was the first system used in verbatim reporting of events, in which it was proved to be capable of extremely accurate record. Gurney Shorthand was the official system of both the Old Bailey (from 1750) and of both Houses of Parliament (from 1813) throughout the 19th and early 20th century, presided over by at least six generations of the Gurney family and widely used - not least by Charles Dickens who used it as a young reporter in the House of Commons, and whose firsthand experiences of learning shorthand were quoted in the Radio 4 programme! 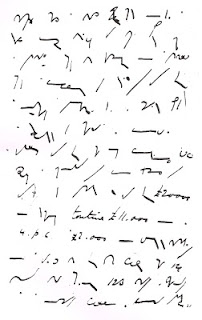 Shorthand notes written by Charles Dickens
and preserved in the Dickens Museum, London
My first ever blog post here was about William Brodie Gurney, Thomas’s grandson, who took eye witness statements at the shooting of prime minister Spencer Perceval in 1812. WBG was also present at the trial of Queen Caroline in 1820 and at many other great political events and proceedings. The firm of WB Gurney & Sons still exists, and recorded proceedings at the inquiries into the sinking of the Titanic (1912) and the  Herald of Free Enterprise disaster (1987).
The first edition of Thomas Gurney’s Brachygraphy: Or An Easy And Compendious System Of Shorthand appeared in 1750. By 1924 when his great great grandson William Henry Gurney Salter was writing A History of the Gurney System of Shorthand, Brachygraphy was in its 18th Edition. WHGS, my great grandfather, also held the official post in the Houses of Parliament; he was succeeded in it by his nephew William Gurney Angus, the last direct descendent of Thomas Gurney to follow in the founder’s footsteps. 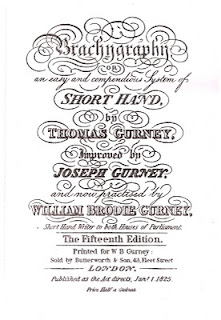 Frontispiece of Thomas Gurney’s Brachygraphy:
Or An Easy And Compendious System Of Shorthand
(15th Edition)
It’s probably just as well that Word of Mouth made no reference to Gurney Shorthand: there’s enough here for a whole other programme. And if anyone from the BBC is reading this, I’m happy to write the script!
Posted by Heart of the Wood at 07:30