Joan Riviere was a first cousin of my great aunt Helen Salter née Verrall. The only description I have of her, apart from photographs, is of a “tall Edwardian beauty with a picture hat and a scarlet parasol.” She was by all accounts a forceful personality. 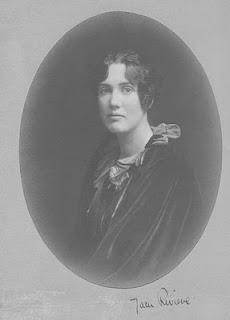 Joan Hodgson Verrall (1883-1962)
After a carefree, artistic childhood – attending finishing school in Germany, learning the language and becoming a court dressmaker in that country for a while – she went through a very rough emotional patch in 1909 from the combination of post-natal depression following the birth of her daughter and crushing grief at the death of her father.
It was through the work of Helen and her mother Margaret at the Society for Psychical Research that Joan was introduced at about this time to the ideas of Sigmund Freud (who more or less invented psychoanalysis) and Ernest Jones (who was the first English-language practitioner of the discipline).
Joan became fascinated by psychoanalysis, and received treatment from Ernest Jones. Jones was so impressed by her understanding of the science that he invited her to be a founder member of the British Pschoanalytical Society which he founded in 1919. At a conference in The Hague the following year she met Melanie Klein, a Viennese pioneer of child psychology whom Joan championed in later life, setting her in a Freudian context (although she eventually distanced herself from Kleinian theory). 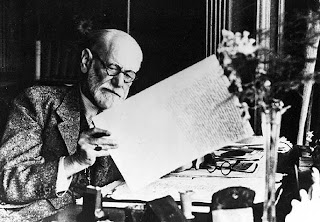 Sigmund Freud, whose writings Joan Riviere translated
At the same conference Joan met Freud himself for the first time and asked him to analyse her. This he eventually did, in Vienna in 1922, when her therapy with Jones reached a blockage. She had already begun her work of translating Freud, and she is widely regarded as the best translator of his work, capturing not only the ideas but the character of his writing.
In addition to her translations of Freud and support of Klein, Joan wrote several important papers of her own, including Womanliness as a Masquerade (particularly in intellectual women, to cover their sense of masculinity) and Jealousy as a Mechanism of Defence. The latter predated similar Kleinian theory by 25 years.
Her therapy with both Jones and Freud was difficult. Freud wrote of her, “She cannot tolerate praise, triumph or success ... she is sure to become unpleasant and aggressive and to lose respect for the analyst.” His concept of Negative Therapeutic Reaction was based largely on his work with her, and later she would write what some regard as her most important original work of psychoanalysis, the 1936 publication Contribution to the Analysis of the Negative Therapeutic Reaction. In it she drew on her personal responses to the analyses of Jones and Freud, her observations of her own clients – she was herself by now a trained analyst – and the theories of Klein. Where Freud saw the reaction as a reluctance to give up the pain of suffering because of a sense of guilt, Riviere argued that it was a refusal to give up control for fear of the inner world of despair which a surrender to analysis might reveal. “This,” she wrote, “has been my own experience.”
Posted by Heart of the Wood at 07:30