Some stories are long, and some are short. Some are funny; some are sad. Some touch the hem of history, but this one has no impact on anything or anyone, except Arthur's parents, nurse and siblings.
By the late nineteenth century, child mortality was greatly reduced. Samuel Salter (1773-1842) lost at least two children before they the age of two (not counting any that went unrecorded through dying at birth). Brodie Gurney (1777-1855) lost three. Their grandson William Henry Gurney Salter (1837-1928)  benefitted from advances in medical science; he only lost one. The other five of his babies made it to childhood.
Four of them made it to adulthood. Arthur wouldn't even have made it to this blog if he had died two years earlier. But he lived through a census year, 1891, just one: and here is his entry, taken on 5th April that year.

The Salter Family census return
5th April 1891
Arthur G. ditto: 7: [born in] Kensington. Middlesex: imbecile from childhood. [He's not a scholar, we know that too.]
Also in the household, a companion for Mrs Salter; a cook; a domestic nurse; a house- and parlourmaid; an under-parlourmaid; and Esther Warren, nurse to imbecile child.
Arthur's death aged 10 is recorded two years later in the second quarter of 1893. Se we know that his birthday was after the 5th April and before the end of June. But that's really about it.  For the rest we just have to guess - what were his toys? how did he get on with his brothers and sisters? did he want to be a train driver? did he want to be a barrister and shorthand writer to the Houses of Parliament like his father? 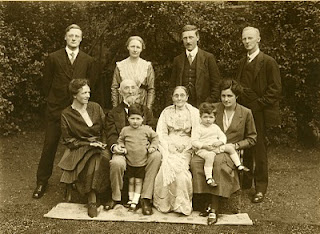 William and Jane Salter
on their 50th wedding anniversary, 1920
Back row, their surviving children
(with wives and grandchildren)
Whether he struggled all along, or took a sudden turn for the worse at the end, I do know this. From what I've read in William Salter's memoirs of his own childhood, little Arthur's father was a loving family man, and Arthur's death even if expected will have hit the whole household hard. And ten years is enough to make an mark, and he won't have been forgotten. He isn't.
Posted by Heart of the Wood at 07:30