The year 1812 is best remembered in for the Tchaikovsky overture of the same name, written in 1882 to mark the seventieth anniversary of Napoleon’s humiliating retreat from . But it is also the date of an event unique in British political history, the assassination of a British Prime Minister.

In 1807 Britain had begun to blockade French ports, and Napoleon responded by attempting to divert French trade through other European ports. The British strategy had been unsuccessful in restricting France, and British trade with was suffering. After violent protests in the streets, the prime minister Spencer Perceval was forced to concede a parliamentary inquiry into the policy. 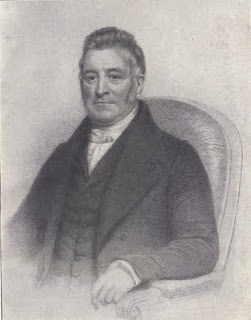 Thus it was that my great great great grandfather William Brodie Gurney, official shorthand writer to the House of Commons, found himself in a committee room there at 4.30pm on 11th May 1812, recording evidence being given to the Inquiry. He later wrote in his memoirs:

Mr Perceval … was entering the Lobby when he was shot by Bellingham. I shall never forget the appalling scene. A shot was heard, and one or two members near me had just said, “What is that?” when Sir Charles Burrell rushed into the room, exclaiming, “He is shot! He is shot!” Every one cried out, “Who is shot?” “Perceval.” Every one immediately rushed to the door. … I saw the corpse of Mr Perceval on the table in the Speaker’s room, and then attended in the House to take the evidence of the doorkeeper of the House of Commons, who saw the deed committed.
Having shot Perceval, John Bellingham quietly sat down in the lobby and waited to be arrested. His grievance had been the failure of the British government either to intervene when he was being held in a Siberian prison for four years or to compensate him for those years. His trial began on 13th May. During the proceedings in the Old Bailey, also taken down by W.B. Gurney, the court heard that would have preferred to assassinate the British Ambassador to , but had settled for the Prime Minister as the “representative of his oppressor.”

Witnesses argued for a plea of diminished responsibility due to insanity, but himself did not, and the judge, Sir James Mayfield, was unmoved. Found guilty, the defendant was hung in public a week to the day after the assassination. A public subscription for his widow and family raised more money than he could ever have hoped for in compensation. Later the day of ’s hanging, 18th May, Brodie Gurney’s sixth child and second daughter was born – Mary Anne. Her arrival was naturally greeted with great joy; she looked, Gurney felt, just like her late sister (who had died earlier in the year during a measles epidemic). She was, he wrote, from the start showered with affection and jealously loved.