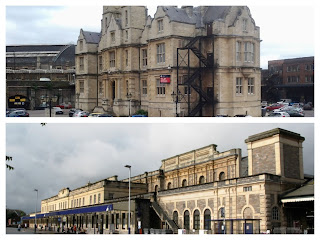 The Bristol & Exeter termini at Temple Meads (above, photo by AfterBrunel) and St Davids (below, photo by Geof Sheppard) – the Exeter building replaces Brunel’s original. Both photos from Wikipedia


The engineer for the route was none other than Isambard Kingdom Brunel, with whom other branches of my ancestry have personal connections: my 4x great aunt Sarah Guppy discussed bridge-building with him before he built the Clifton Suspension Bridge in Bristol , and my 4x great uncle Daniel Wade Acraman supplied ironwork and machinery for Brunel’s masterpiece the SS Great Western. Sarah, her husband Samuel and her son Thomas Guppy all introduced innovative engineering solutions for the SSs Great Western, Great Britain and Great Eastern. Thomas and Isambard were lifelong friends and set up the Great Western Railway Company together, which connected London with Bristol.


The Bristol & Exeter naturally adopted the GWR’s broad track gauge of seven feet. It opened in 1844, seven years after the GWR, and to save money it operated for the first five years with GWR steam engines. When James Pearson took over as the B&ER’s Locomotive Engineer in 1850, he designed a succession of remarkable steam engines. Railway buffs are particularly fond of his 4-2-4 locomotives which used a flangeless driving wheel of exceptionally large diameter, up to nine feet. These huge wheels gave the Pearson machines an advantage in terms of speed, and at least one B&ER train travelled at over 80mph on a downhill section in Somerset. 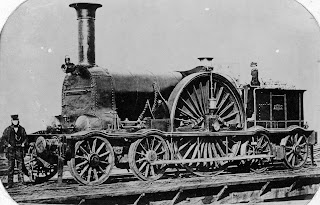 
The B&ER was innovative in other ways, the first significant line to operate the block system of working to avoid collisions, and one of the first to use an electric telegraph for communication throughout its length. It was moreover a profitable line.

In the 1870s it bowed to the inevitable and began to convert its track from Brunel’s broad gauge to the Stephenson standard of 4ft 8½ins, which had won the So-called Gauge Wars for domination of the railway system. The conversion would allow the B&ER to carry through trains to and from the rest of the British network. But the costs involved in this pushed the B&ER into an amalgamation with the GWR in 1876, and the line’s history as an independent operation was over.


My most direct connection with the B&ER is something of a mystery. Among the papers of my great great great uncle Charles Castle which I inherited are two letters written in 1857 on B&ER letterheads, to Charles from his brother in law William Harwood, the Secretary of the railway company. I am not very sharp on financial business, but money is changing hands and the South Australian Banking Company is involved. (More in my next post!)
Posted by Heart of the Wood at 07:30