As I write, the new British government has just appointed a homophobic, karaoke-loving Conservative who voted against equal pay for women as the new Arts and Culture Secretary. I fear for the future of the arts in Britain. I’ve worked in theatre, applied arts and publishing my whole life and never earned anything approaching the national average wage. If you want to live in anything other than a cultural desert, the state MUST support the arts. Arts workers cannot otherwise afford to support the culturally enriching creative industries which bolster the nation’s mental and physical health.

I’m proud to have many artists in my family tree, past and present. I’ve celebrated the work of Austin Cooper here on many occasions, and also that of Thomas Cooper Gotch. Gotch was a cousin of my 2x great grandfather, and his daughter Phyllis followed her father into the profession. 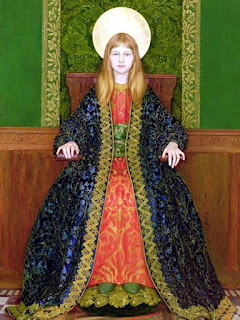 She had little choice. She was raised by her parents and their circle of friends in the very Bohemian atmosphere of the Newlyn group of artists in Cornwall. They were painting most of the time, and very often they were painting her. When they weren’t painting, they were putting on entertainments; and Phyllis loved to dress up, to sing and to stage colourful parties and pageants.

It’s all reminiscent of the circle surrounding George Macdonald, to whom I’m also related by marriage, about which I wrote here earlier. It must have instilled a love of imaginative story-telling in Phyllis. At the age of twenty-one she published her first book: The Romance of a Boo-Bird Chick, a morality tale in verse about the evils of gossip, which she both wrote and illustrated. A sequel followed in 1904, Tuffy and the Merboo – More Boo-Birds, in which Tuffy, a chicken, goes in search of a mate and finds love with a mer-boo, half fish and half bird. 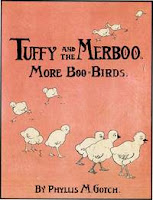 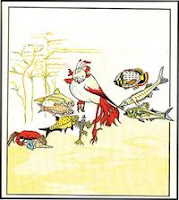 Tuffy and the Merboo (R Brimley Johnson, London,1904), the cover and an inside page, written and illustrated by Phyllis Gotch

Phyllis too found love, three times. Her first husband was Ernest Doherty, with whom she had a daughter and lived in South Africa until his death in 1918; her second was a Frenchman, Andre, Marquis de Verdières, with whom she lived in France until their divorce; and her third, from 1936, was Jocelyn Bodilly, with whom she finally settled down back in Newlyn. (Jocelyn, a grandson of the artist Francis Bodilly, was himself descended from Gotch stock. After Phyllis’s death he served as Chief Justice of the High Court of the Western Pacific for four years, based in the Solomon Islands.)

Despite her divorce, Phyllis decided to keep the title Marquise, by which she was affectionately known for the rest of her life. In 1938, as Félise, Marquise de Verdières, she wrote a novel, Golden Hair, set in South Africa (and, one imagines from its title and setting, semi-autobiographical). 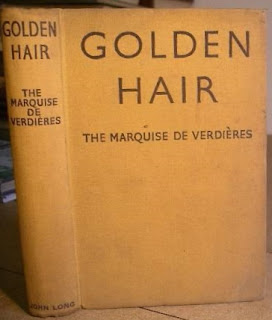 Phyllis Gotch was described by her contemporary, the artist Laura Knight, as impossible to resist. “Had she been a General,” wrote Knight in her memoir, “she could have led millions to death and glory for a hopeless cause.” In later life she used that charisma to campaign for the preservation of historic Newlyn after the Second World War.

Her political passions had earlier been aroused by the Russian Revolution and its aftermath, and in 1926 she published Once I Had A Home, the extraordinary fictional autobiography of Nadejda, Lady of Honour to Their Imperial Majesties the late Empress Alexandra Feodorovna and the Empress Maria Feodorovna of Russia! Nothing about the book reveals that it is a fiction; it purports to be a warning to the British people about the dangers of socialism, written by someone who has suffered under it. There is a terrific article about the book and the author in a British Library European Studies blog.

Although I don’t agree with all her politics, I am fascinated by the variety of Phyllis’s life – her lovers, her locations, her writings, her very pen-names. I too find her impossible to resist. 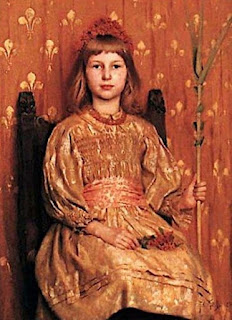