They say that Edward Elgar’s Enigma Variations are variations on a theme which itself never appears. Instead, the music dances around an invisible tune; and musical scholars spend a lot of their valuable time trying to identify the absent theme by the shapes the 14 existing variations makes around it.

Many of the articles which I’ve written for this blog came about as a result of research into one particular ancestor of mine, about whom I have so far not written directly. But today, 22nd September 2012, is the 200th anniversary of his birth; so although in a sense he’s been here all along, here he is at last, my great great grandfather William Augustus Salter. 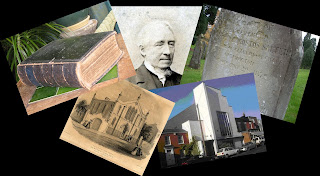 I haven’t written more than passing references to him here because I have been trying to write his biography for the last five years. I had of course hoped to complete it in time for his bicentenary; and until its completion I wanted to keep him to myself. But I have written about (amongst others) his father, his uncles William and David, his wife, his father in law, his children William, Louisa, Frank, Anne, Maria and Emily. These are my variations!

Why, amongst all the remarkable adventurers and high achievers among my ancestors, did I choose to write about William Augustus? He was a humble Baptist minister, an unremarkable one in many ways. He had five pastorships in his career, none more than 80 miles from his place of birth in Watford. He published little; he fought no wars; he never travelled.

But he was a Baptist, at a time when Baptists and other non-conformists were shaping the social and spiritual morality of the nation. In particular he was an educationalist at a time when – long before the introduction of state schools – non-conformists were transforming the educational landscape of the country with Sunday schools, so-called British schools, and even a new university.

William Augustus was actively involved in all these movements. He founded new schools for at least two of his chapels. He met his wife while they both volunteered at one of the Sunday schools founded by his future father-in-law William Brodie Gurney and others. He was in the very first intake at London University, founded by his father and others, the first to offer degrees to students who were not “churchmen” (members of the Church of England).

Joseph Angus, his friend and fellow student at Stepney Baptist College, became a high profile Baptist academic. By contrast William Augustus, a biblical scholar of some note, wrote anonymously the explanatory notes for a groundbreakingly accessible version of the Bible. All these were Baptist initiatives which were subsequently copied by the Church of England, the establishment religion with no initial interest in changing the status quo.

By telling William Augustus’s story I can paint the bigger picture, the theology of liberation through self-improvement which non-conformists offered in the nineteenth century. William Augustus’s life spanned the central two-thirds of that century. Baptists were obsessive recorders of their activities in magazines and minute books, and there are a great many references and details to be found of my ancestor minister’s deeds and thoughts.

Best and most personal of all, some of his sermons were published posthumously by his family, recorded verbatim (in shorthand, by his son) as he preached them – I can almost hear him speak. If you’re listening, William Augustus, Happy Birthday!
Posted by Heart of the Wood at 07:30