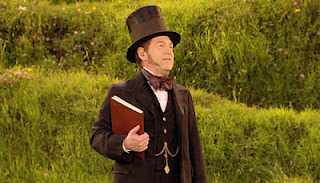 Thomas Guppy wasn’t portrayed at the Opening Ceremony of the 2012 London Olympics, but his friend and colleague Isambard Kingdom Brunel was, by Kenneth Branagh

The Guppys and the Jennings’s were prominent families in the important British port city of Bristol, for which in 1830 a young Isambard Kingdom Brunel designed the Clifton Suspension Bridge. The bridge used construction techniques devised by uncle Thomas’s remarkable mother Sarah Guppy; and thereafter Thomas and Isambard became lifelong friends and colleagues. The same year that Brunel won the competition to design the Clifton bridge, he and Guppy formed a company to build a railway from the nation’s capital London stretching westwards to its most important seaport Bristol – the Great Western Railway.

The GWR won parliamentary approval for construction in 1832, and was formally founded in 1833 – Thomas was a director, and Isambard the GWR’s chief engineer. Thomas injected large amounts of his own money to fund the project; and during its construction Thomas’s mother Sarah also contributed. Later, after its opening, she proposed the idea that the banks of railway cuttings could be stabilised by planting trees to prevent landslides onto the track. 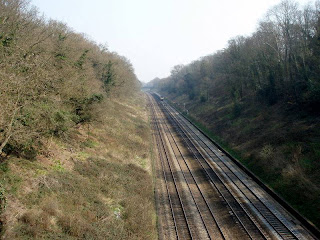 Sonning Cutting on the GWR, scene of a fatal rail accident caused by a  landslip in 1841 which prompted Sarah Guppy to suggest planting willows and poplars

The first GWR trains ran in 1838, but a casual remark from Brunel at a directors’ meeting three years earlier led to Guppy and him launching an even more ambitious project before the first was even completed. Why, Brunel half-joked, should they stop at Bristol? What if passengers could buy a through-ticket from London to New York? There was at the time no regular transatlantic crossing, and no one at the meeting took him very seriously – except Guppy.

The prevailing view was that no steamship could be built large enough to accommodate sufficient passengers and cargo AND the huge amount of fuel required to carry them all across the Atlantic. A committee was formed to plan a ship, to be called the S.S. Great Western, which could overturn such conventional wisdom. Guppy’s father and mother were both responsible for innovations in ship construction, and Thomas now spent three months himself touring Britain’s great ship-building centres, studying the best techniques of the best nautical engineers in the country. 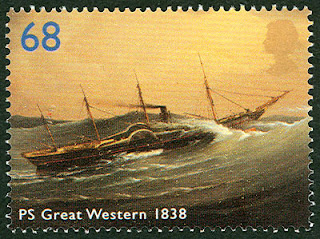 S.S. Great Western, designed by Guppy and Brunel, fitted by Acraman, on a commemorative Royal Mail stamp of 2004

The S.S. Great Western was launched on 19th July 1837 (and fitted out in large part by another 3x great uncle of mine, William Edward Acraman of Bristol ships’ chandlers Acraman & Co). After trials the ship made its maiden voyage to New York and back in 1838 in record time – 15 days out, 14 days back (including 24 hours lost for a stoppage at sea). It had consumed only three-quarters of its fuel supply in the process. As his obituary from the Institute of Civil Engineers noted, “Mr Guppy therefore assisted, conjointly with the late Mr Brunel, in the construction of the precursor of Ocean Steam Navigation.”

Thomas learned much from his 1835 survey of nautical engineering techniques; and he built on them many innovations of his own, which he applied to the Great Western’s successors, the Great Britain (1843) and the Great Eastern (1859). These included using copper plates on the hull instead of iron ones, to reduce corrosion; and (for the Great Eastern) a twin-walled, cellular system for constructing hulls which created a lining of buoyant, independent, water-tight compartments. In these he preempted double-hull improvements which were ordered after the catastrophic failure of the Titanic’s rather less successful watertight compartments some 53 years later.
Posted by Heart of the Wood at 07:30