Thomas Cooper Gotch is today an overlooked pre-raphaelite, impressionist and realist painter, who doesn’t even gain an entry in my Thames and Hudson Dictionary of Art and Artists. But during his life he was a successful artist and influential member of the Newlyn art colony in Cornwall and the New English Art Club which challenged the conservative authority of London’s Royal Academy. 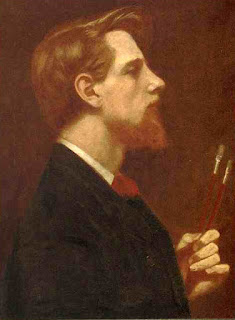 Thomas’s 2x great grandfather was my 5x great grandfather, John Davis of Little Missenden - making TCG some sort of contemporary cousin of my great grandfather, although I don’t think they knew each other. Thomas was born in Kettering and travelled widely in Europe and Scandinavia. He lived and studied in France for a while and it was on his return in 1885, with fellow students including Stanhope Forbes, Frank Bramley, Walter Sickert and John Singer Sargent, that he co-founded the NEAC.

Forbes and Bramley were also involved with Gotch in the Newlyn School, established at around the same time. As Wikipedia puts it, “Newlyn had a number of things guaranteed to attract artists: fantastic light, cheap living, and the availability of inexpensive models.” The Newlyn group was one of several from France to California at the time who rejected studio-based painting (working from sketches made on location) in favour of painting in the open air, an art movement known by the French translation, en plein air. 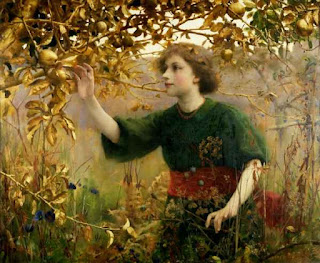 Newlyn, a small fishing village on Cornwall’s south coast, boasted tremendous natural light of course – all that sea and sky – and also provided interesting outdoor scenes of working life. Thomas was a superb painter of figures, and frequently used his own family as models in his work. But his imagination ran beyond simple real-life scenes to paintings rich with symbolism; in the aspirational A Golden Dream, the gilded apples were achieved with most unnaturalistic gold spraypaint.

Gold symbolized purity, unspoilt by the world, and Gotch often associated it with youth, as in the portrait of his daughter Phyllis, The Child Enthroned. He was a master colourist, whether working in the sharp realism of his middle period or the tonal impressionism of his final decades. 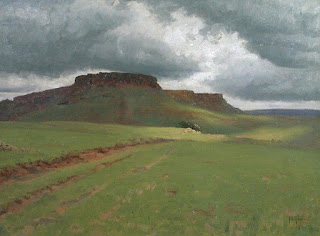 Qua-Qua (1912)
south of Johannesburg,
painted during a tour of South Africa

I’m no art critic, and too big a fan of Gotch’s work to try to do justice to it in a short blog post! Instead, I cannot recommend too highly The Golden Dream, the biography of him by his 21st century champion Pamela Lomax. It’s extremely readable, full of illustrations and very detailed about his life and work. I’m very proud to be even a remote cousin of this finest of fine artists. 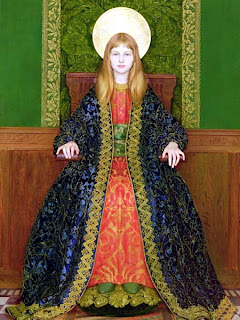