I’ve had a soft spot for my Acramans since I found that single part-sad, part-humorous letter from my cousin Edward Daniel Acraman (see earlier posts). He was in Adelaide, a long way from home, when he wrote it, and never got back to Bristol.

Edward was named after his father, William Edward (my 3x great uncle), and his grandfather, Daniel Wade Acraman. Father and grandfather presided together over something of a golden age of Acraman prosperity in Bristol in the first half of the nineteenth century. They had passed like so many English families of the eighteenth century from a rural economy as yeoman farmers to urban industrial activity.

In the Acramans’ case they became iron founders and workers in Bristol, one of the most important ports in England at the time. Daniel Acraman patented a chain cable design in 1823, and by the 1830s the Acramans had a business empire of several companies and partnerships connected with marine engineering, manufacturing and supplying anchors, chains, boilers and other metalwork for shipping. 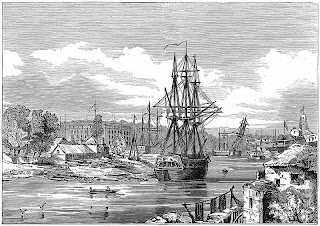 Bristol Harbour, with Acraman’s Warehouse to the rear on the left
and S.S. Great Western rear right under construction

The city was a centre for import and export, an obvious target for entrepreneurs of the railway boom of the early nineteenth century who were all racing to capture the lucrative freight market. The Great Western Railway, GWR, known to its passengers and shareholders as God’s Wonderful Railway, was formed at a public meeting in Bristol in 1833 took on the task of building a line from London to the city. The project was designed by the engineering genius Isambard Kingdom Brunel, who had already demonstrated his brilliance by his 1831 design for the Clifton Suspension Bridge in Bristol, the longest bridge in the world at the time (although it was only completed in 1864, five years after his death).

Brunel was not afraid to think big. He chose a wider-than-usual gauge for his track – 7 feet and one quarter of an inch, compared to the Stephenson standard gauge of 4 feet 8½ inches – and he had big ideas too about the length of journey his passengers could undertake. Why stop at Bristol? Brunel began to see the possibility of buying one ticket which could take you from London to New York. Such a voyage was becoming a technical possibility at the time, and several groups of businessmen were racing to make it a reality. The Great Western Steamship Company was formed in Bristol in 1836, and Brunel set about designing its flagship the S.S Great Western. 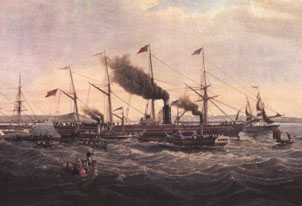 Of course it was to be no ordinary ship. When it was launched in 1837 it was the largest steamship in the world, intended to prove Brunel’s theory that a larger ship would be more fuel efficient. It was built in the Patterson & Mercer yard at Bristol, and it seems that most of the machinery and ironwork on the wooden-hulled vessel was supplied by Acraman Morgan & Co. (The engines themselves were supplied and fitted by Maudslay, Sons & Field of Lambeth on the Thames.) The Great Western broke all records for a transatlantic crossing and arrived with a third of its fuel unused, vindicating Brunel's design. It became the first ship to offer a regular service between Britain and New York.

The success of the Great Western in pioneering the transatlantic route may have encouraged Acraman Morgan & Co to go into shipbuilding themselves in 1839. But the Acramans were in danger of becoming overextended. They had diversified in 1834 into a different kind of shipping interest, with a  company called Acraman Bush Castle & Co which imported tea from Canton. Having only recently (1832) completed a huge warehouse to accommodate all their ironworks, they had almost immediately had to invest in a large extension to it to store the tea. 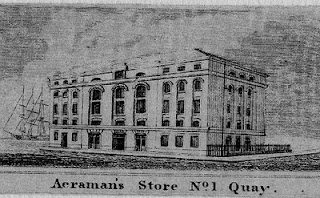 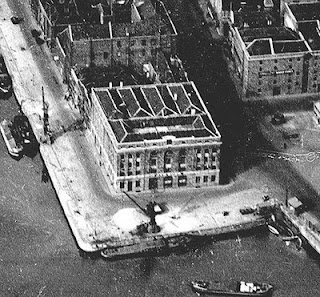 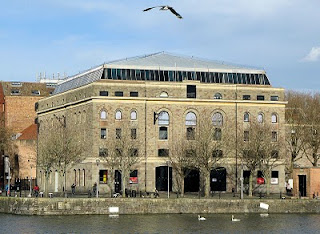 and today, as the Arnolfini Gallery

In all, too much money was going out and not enough coming back in. William Edward Acraman wrote in 1836 to one of his investors, “I wish one of these ships would arrive with some strong cargo [of tea].” But he also revealed that Messrs Bush and Castle were among those investors who had not yet paid in full for their shares in the company. Whether the ships never came in, or the investors never paid, the tea company went bankrupt in 1842, bringing about the spectacular financial collapse of the Acraman empire. The huge Acraman warehouse was sold off in 1846 to pay for the empire’s debts – and bought by the Bush family. It has been known as Bush House ever since.
Posted by Heart of the Wood at 07:30