Doctor Thomas Baynton’s report:
“Master Wm. Castle, son of Thomas Castle, esq. of Portlandsquare, Bristol, when about a year old, was observed to have lost his health, and it was discovered that he could not move his legs as well as he had been accustomed to do. On examining the spine I discovered that four of the lower dorsal vertebrae were in a diseased and protruded state, and that great pain was occasioned by moderate compression, either of the bones or contiguous soft parts. Absolute rest on a hair mattress was strictly enjoined; the muriate of lime, in appropriate doses, directed, and the constant care of a confidential servant ensured. The advantages resulting from those means were soon apparent; they continued progressively to increase till the cure was accomplished. At the end of the tenth month he was allowed to roll and play on a carpet; in a short time after he got on hit feet without assistance, and has continued in perfect health from that time to the present. The curve is entirely removed.” 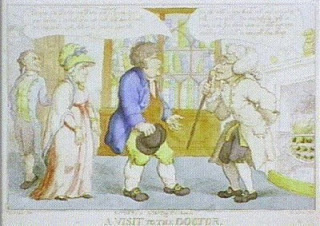 A Visit to the Doctor
(18th century engraving)
Young master William was my great great grandfather. Doctor Baynton published this review of the boy’s case in his 1813 bestseller, “An Account of a Successful Method of Treating Diseases of the Spine. With Observations, and Cases in Illustration.” It was the sequel to his publishing debut of 1797, “A Descriptive Account of a New Method of treating Old Ulcers of the Legs,” which sold so well that it ran to a second edition, “enlarged, corrected and considerably improved,” in 1799.
Baynton’s Big Idea, when it came to treating spinal disorders, was complete and horizontal rest for anything up to 18 months on a sort of very firm hospital bed of his own design. 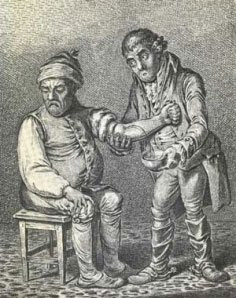 Draining a patient
(18th century engraving)
Although his ten months of treatment must have seemed an eternity for the one-year old boy, William was lucky, in a way. By 1811 Baynton had altogether dispensed with the still-widespread 18th century practice of “draining” a patient, a procedure which had hitherto been applied to all manner of ailments.
“Draining” was nothing more than blood-letting. Blood was drawn off into a measuring bowl in specific amounts depending on the condition being treated. It could be taken from the arm as in the above illustration, but was often collected direct from the affected area. Heated glass cups were placed on the skin. The resulting vacuum drew the blood to the surface in a dome of flesh, from which the blood could more easily be let. “Cupping” was even then a centuries-old procedure which, although largely discredited now, is still sometimes practiced today in alternative therapies.

Cupping-glasses (left) and a measure-marked blood-bowl
from the late 18th century
I’m not qualified to work out from Baynton’s description what exactly was wrong with William. Muriate of Lime (calcium chloride) was used as a cooling poultice to reduce inflammation, I think. But obviously – because here I am writing about him – my great great grandfather survived.
Baynton was described in 1830 by one biographer as “not backward in cherishing the idea that he had outstripped all his brethren in professional attainments. I never was in his company without hearing him relate some Wonderful Wonder in rescuing some patient from the jaws of death.” He had such a low opinion of his medical brethren’s abilities that in 1820 he refused treatment for a urinary infection, from which as a result he died at the age of 59. But it must be noted that his Big Idea for the treatment of ulcers – dressing them instead of deliberately keeping them open – was still in use as Baynton’s Method 200 years after he devised it.
Posted by Heart of the Wood at 07:30