In 1848, while my great great great grandfather Brodie Gurney was celebrating the birth of six grandchildren, the rest of was in chaos. Revolution was breaking out all over the place, including , from which my cousin John Salter had had to flee, rapidly relocating his nursery to the less glamorous Hammersmith.

In there was also revolution, but of a different form. It was led not by a popular rabble but by Lajos Kossuth, a lawyer, and its aim was not to overthrow the Hungarian government but to throw off the yoke of Imperialist Austria. , they felt, was rather overlooking the Hungarian in Austro-Hungarian Empire. My great great great uncle Charles Castle agreed. 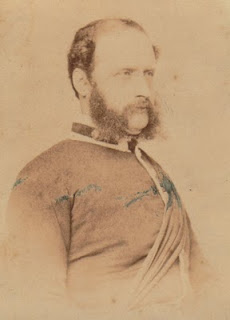 In the Chartists were agitating for a revolution of their own. Mass demonstrations were planned; the lamps outside had been smashed and cries of “Vive La Republique!” had been heard, and the Royal Family were advised to leave . The Chartists wanted parliamentary reform including universal (male) suffrage; but in the international mood of rebellion prevailing in 1848, they represented greater change and anti-imperialism too.


In the event, the government of the day toughed it out and there was no British Revolution. But resentment simmered, and there was great popular support for the upheavals on the continent, particularly the struggles in . had roped in the support of another imperial power, , and with severity crushed the revolution on their doorstep. Although Kossuth had the support of Lord Palmerston the British foreign secretary, it was politically impossible for the British government to lend the Hungarian revolution any material or diplomatic aid. The English people however made their feelings known – on a visit to in 1850 the savage Austrian general Haynau, who had executed revolutionary martyrs and whipped women sympathetic to the cause, was beaten up and thrown into a horse trough by the draymen of Barclay Perkins Brewery in .


Kossuth went into exile in 1850, arriving in in 1851. He was a popular hero, attracting widespread support, civic testimonies and crowds of workers up to 100,000 strong in Winchester, Liverpool, Manchester, Birmingham and London. And in … 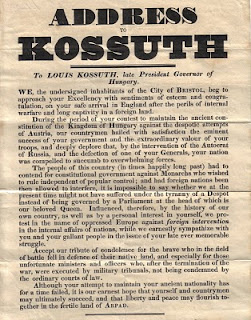 Address to Kossuth
by Charles Castle of Bristol

In Bristol Charles Castle, a local lawyer and wine importer, wanted Bristolian sentiment to have a voice too. Time was short – Kossuth had arrived at on the 23rd October and was in for only three weeks. On Friday 7th November Castle hurriedly composed a staunchly worded petition of support for Kossuth. It was published the next day on posters throughout the city with a note of where supporters might sign it. By Wednesday 12th November the petition had attracted 5585 signatures which (wrote Castle’s fellow petitioner JF Gilbert) “I think is highly satisfactory.”


It was an impressive total. But Kossuth wasn’t coming to . What do you do with a 5585-strong petititon? (Find out in Part Two!)
Posted by Heart of the Wood at 07:30